Dr. Sarah Deer is a citizen of Muscogee (Creek) Nation of Oklahoma, University Distinguished Professor of Women, Gender, and Sexuality Studies and Public Affairs and Administration at the University of Kansas, and author of the award-winning 2015 book, The Beginning and End of Rape: Confronting Sexual Violence in Native America, the culmination of over 25 years of working with survivors. Ending violence against women is her life’s goal. A lawyer by training but an advocate in practice, Deer’s scholarship focuses on the intersection of federal Indian law and victims’ rights, using indigenous feminist principles as a framework. Her work to end violence against Native women has received national awards from the American Bar Association and the Department of Justice, and she was appointed by Attorney General Eric Holder to chair a federal advisory committee on sexual violence in Indian country. Deer is also Chief Justice for the Prairie Island Indian Community Court of Appeals. 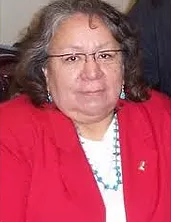 Bonnie Clairmont (Ho-Chunk) is a Victim Advocacy Specialist with the Tribal Law and Policy Insititute, based in their St. Paul, MN office. She was previously the Outreach/Client Services Coordinator for Sexual Offense Services of Ramsey County, a rape crisis center, where she provided leadership in the development of Sexual Assault Response Teams, Sexual Assault Nurse Examiner programs, and multidisciplinary sexual assault protocol development. She has worked more than twenty-five years advocating for victims of sexual assault and domestic violence, providing and improving services for victim/survivors of sexual assault, battering, and child sexual abuse, particularly those from American Indian communities. Bonnie is the co-editor of Sharing Our Stories of Survival, an anthology of writing by Native Women who have experienced violence, and provided technical research assistance for the Amnesty International report, “Maze of Injustice: The failure to protect Indigenous Women from sexual violence in the USA.